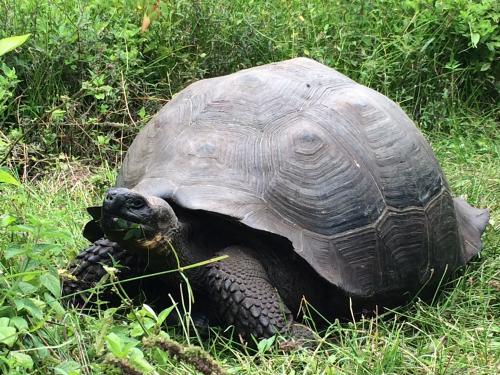 On Santa Cruz Island in the center of the Galapagos Archipelago, two populations of giant tortoises occur – one on the west side of the island in an area known as the “Reserve” and one on the lower eastern slopes near a hill named  “Cerro Fatal.”  Until now, it was assumed that these groups belonged to the same species of tortoise. Genetic analyses, conducted by an international group led by Dr. Gisella Caccone at Yale University, have now clearly identified these two populations as separate species: the Western Santa Cruz Tortoise (Chelonoidis porteri) and the newly named Eastern Santa Cruz Tortoise (Chelonoidis donfaustoi).

“The naming of this new species will increase efforts to protect and restore the Eastern Santa Cruz Tortoise,” said Dr. Caccone.  “Its low numbers, limited geographic range, and reduced genetic diversity make it vulnerable. As a newly recognized species, it will now receive the attention needed to ensure its survival.”

Giant tortoises were devastated throughout the Galapagos Islands due to human exploitation over the centuries, introduced species, and habitat degradation.  The Giant Tortoise Restoration Initiative (http://www.galapagos.org/conservation/tortoise-restoration/), a collaborative project of the Galapagos National Park Directorate, Galapagos Conservancy, Dr. Caccone’s group at Yale University, and others, is focused on the long-term restoration of all Galapagos tortoise populations to historical numbers.  Special emphasis will now be placed on the Eastern Santa Cruz Tortoise.

“This is an exciting moment in the history of Galapagos giant tortoises,” said Dr. Linda Cayot, Science Advisor for Galapagos Conservancy.  “Over the last several years, the ever-growing role of genetics in guiding development of conservation strategies for Galapagos tortoises continually requires us to think in new ways.”

The new Eastern Santa Cruz Tortoise was named in honor of Fausto Llerena Sánchez, known to his colleagues and friends as “Don Fausto.”  Don Fausto dedicated 43 years of service (1971-2014) to giant tortoise conservation as a park ranger for the Galapagos National Park Directorate. He was the primary caretaker at the Tortoise Breeding and Rearing Center on Santa Cruz, which now bears his name. The restoration of several tortoise species is due in large part to Don Fausto’s dedication and efforts.