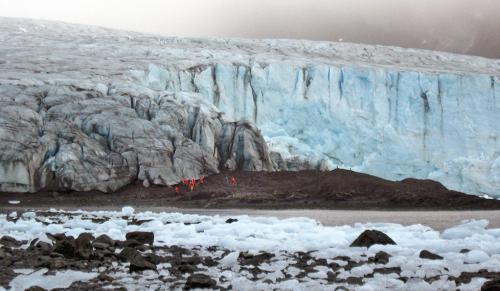 The largely barren islands reaching north from Antarctica are actually the birthplace of many modern species of marine life — and perhaps will be the first places to be impacted by invading species in the wake of climate change, according to a study by researchers at Yale University and the North Carolina Museum of Natural Sciences.

We used to think diversity was generated on continents and spread to islands,” said Thomas Near, professor of ecology and evolutionary biology and the Bingham Oceanographic Curator at the Peabody Museum of Natural History, and senior author of the paper appearing July 24 in the journal Nature Ecology and Evolution. “But in Antarctica, it is the islands that hold seeds of diversity and the continent that is home to the youngest species.”

For the past 40 million years, the Antarctic has been insulated from other ecosystems by a cold water thermal barrier. As a result, one lineage of fish adapted to cold water has come to dominate the entire continental region.  Almost all species of fish in Antarctica are from the notothenioid lineage, which includes the Chilean sea bass, a restaurant staple.

A genetic analysis conducted by researchers from the Peabody Museum at Yale and the North Carolina Museum of Natural Sciences shows that during periodic advances of glacial ice, many species of marine life retreated to the Scotia Arc, the archipelago that extends northward into the Southern Ocean. It is there that new species arose and, as ice retreated again, repopulated areas of the continent.

“Imagine if Florida and the Bahamas were the places that repeatedly gave rise to North America’s animal species,” said Alex Dornburg, research, curator of ichthyology at the North Carolina Museum of Natural Sciences, and lead author of the study. “It would put an entirely different emphasis on our conservation efforts and resource management strategies.”

Much like Florida, the Antarctic northern peninsula is now threatened with the arrival of new “colonists,” and these invading species have the potential to fundamentally alter the food web of this fragile marine ecosystem, the authors say. Also, the fishes of the Southern Ocean are the basis of a multi-billion dollar international economy and a major source of food for whales, seals, penguins, and albatrosses.

“In an elegant twist of fate, the source area for Antarctica’s marine fish species is now a point of entry for invading colonists,” said Dornburg. “We may be seeing the reversal of a major evolutionary process.”

This ancient pattern found by the team is already threatened by climate change and arrival in the Scotia Arc of invasive species such as king crabs, a predator that promises to disrupt the delicate balance of marine life.

“The system is very fragile, and marine life have had only limited predators to deal with,” Near said. “Now it’s an all-you-can-eat buffet.”

Primary funding for the research was provided by National Science Foundation.

Other authors of the paper included Sarah Federman of Yale University, April Lamb of North Carolina State University and the North Carolina Museum of Natural Sciences, and Christopher Jones of National Oceanic and Atmospheric Administration.

Their recently published paper can be read in Nature Ecology & Evolution at https://www.nature.com/articles/s41559-017-0239-y