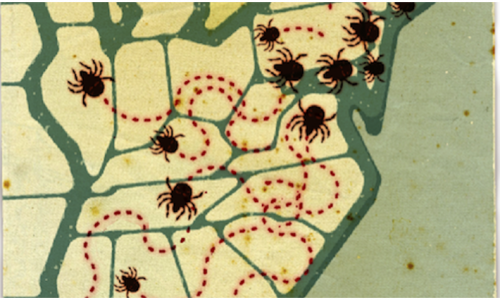 A team of researchers led by the Yale School of Public Health has found that the Lyme disease bacterium is ancient in North America, circulating silently in forests for at least 60,000 years—long before the disease was first described in Lyme, Connecticut, in 1976 and long before the arrival of humans.

For the first time, the full genomes of the Lyme disease bacterium, Borrelia burgdorferi, were sequenced from deer ticks to reconstruct the history of this invading pathogen.

The finding shows that the ongoing Lyme disease epidemic was not sparked by a recent introduction of the bacterium or an evolutionary change—such as a mutation that made the bacterium more readily transmissible. It is tied to the ecological transformation of much of North America. Specifically, forest fragmentation and the population explosion of deer in the last century have created optimal conditions for the spread of ticks and triggered this ongoing epidemic.

Katharine Walter conducted the research while a doctoral student at Yale School of Public Health and is lead author of the study published in Nature Ecology and Evolution.

Lyme disease is the most common vector-borne disease in North America. Since it was first described in the 1970s, the disease has rapidly spread across New England and the Midwest. Reported cases of Lyme disease have more than tripled since 1995 and the Centers for Disease Control and Prevention now estimate that more than 300,000 Americans fall ill each year.

The team turned to genomics to reveal the bacterium’s origins. By comparing B. burgdorferi genomes collected from different areas and over a 30-year period, the team built an evolutionary tree and reconstructed the history of the pathogen’s spread.

Researchers collected deer ticks, vectors of B. burgdorferi, from across New England. They focused sampling efforts in areas predicted to be sources of the epidemic—Cape Cod and areas around Long Island Sound. Over  7,000 tick were collected from these areas during the summer of 2013. To extend the spatial scope of the study, collaborators in the South, Midwest, and across Canada contributed ticks to the team.

Using a method the team previously developed to preferentially sequence bacterial DNA (and avoid sequencing only DNA from the tick), the researchers sequenced 148 B. burgdorferi genomes. Earlier studies of the evolutionary history of B. burgdorferi have relied upon short DNA markers rather than full genomes. Reading the one million letters of the full bacterial genome allowed the team to piece together a more detailed history. The team drew an updated evolutionary tree which showed that the bacterium likely originated in the northeast of the United States and spread south and west across North America to California.

Birds likely transported the pathogen long distances to new regions and small mammals continued its spread. Imprinted on the bacterial genomes was also a signature of dramatic population growth. As it evolved, it seemed to have proliferated.

This findings clarify that  the bacterium is not a recent invader. Diverse lineages of B. burgdorferi have long existed in North America and the current Lyme disease epidemic is the result of ecological changes that have allowed deer, ticks and, finally, bacterium to invade.

The explosion of deer in the twentieth century into suburban landscapes, free of wolf predators and with strict hunting restrictions, allowed deer ticks to rapidly invade throughout much of New England and the Midwest. Climate change has also contributed. Warmer winters accelerate ticks’ life cycles and allow them to survive an estimated 28 miles further north each year.

Ticks expanded into suburbanized landscapes—full of animals like white-footed mice and robins, excellent hosts for B. burgdorferi. The expansion of ticks into habitats with ideal hosts allowed the bacterium to spread.

Adalgisa Caccone, a lecturer at Yale in Ecology and Evolutionary Biology and a senior research scientist at the School of Public Health, and Maria Diuk-Wasser, of the Department of Ecology, Evolutionary and Environmental Biology at Columbia University, are senior authors. Giovanna Carpi, of the Johns Hopkins School of Medicine, also contributed to the research.